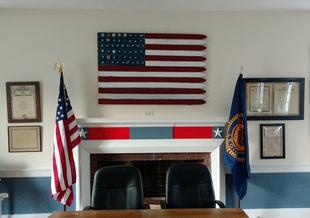 ​​​This Day In Military History

The Post is now open, Please wear a mask or you are not allowed inside.

WE WILL BE MEETING VIRTUALLY  ONLINE ONLY

James B. Whipple was born in South Wilton, Connecticut, February 7, 1893. James entered service in Michigan  and served with the 76th Company, 1st Battalion, 6th Regiment,  2nd Marine Division in France. While trying to recover some friends who had been wounded, he was killed in Belleau Aisne, France, June 3, 1918. He was the first resident from Wilton KIA in WW I. His awards include the Purple Heart, two Bronze Stars, the WW I Victory Medal, the Aisne Campaign Battle Clasp and the Defensive Sector Battle Clasp. Corporal Whipple is buried in Plot A, Row 8, Grave 53, in the Aisne-Marne American Cemetery, Belleau, France.Post 86 applied for a Post Charter April 10, 1920 as James B. Whipple Post 86. The applicants included George D. Barringer, Carlton B. Weed, Horace M. Hollister, George Middleborough, William E. Godfrey, Norman C. Godfrey, Charles A. Eakland Jr., Charles W. Burt, Harry Marhoffer, Leslie Withuel, Harry E. Auinack, Fred E. Davis, Edward Bouteiller, Fred Kuehnell and Lawrence Banninger. The Post was chartered October 1, 1920, with George D. Barringer, Commander, George T. Heading, Adjutant, Fred Kuehnell, Treasurer, George W. Pleasants, Athletic Officer. Membership that first year was 19, with annual dues at $2.00. The Post was active for a short time, then became dormant for a couple years. The current building was designed by Wilton architect Nelson Breed, the property bought by the members. Fritz Meyer, a local builder and charter member, donated some workers and materials to build the Post. It stands as a testament to these men that not only does it remain a fixture in Wilton Center, but has remained a veteran's sanctuary and meeting home for all these years.Today, Post 86 stands as a proud monument to those brave and hardy men. We are active in many endeavors, including Homes for the Brave, Kick for Nick, Female Soldiers, Forgotten Heroes, Memorial Day, Flag Day and Veterans Day; a Flag retirement ceremony, Flag ettiquette classes; The American Legion Oratorical Contest and Boys & Girls State; providing a Color Guard for various events including funerals, dedications and various ceremonies. We sponsor a High School graduate with a scholarship towards college. We also sponsor a Student School Award for two High School and  two Middlebrook eighth grade students.If you have served at least one (1) day on active duty in the Armed Forces since December 7, 1941, you are eligible to join the American Legion. Click here to get started!CONTACT US: